Skip to content
HomeKaguya-sama Love is War Episode 3: That ED Makes This Anime Even More Hyped

Starting the episode with the narrator narrating the first few seconds, I honestly thought, oh man is he REALLY going to narrate the same thing again and waste four minutes of the content? But then they speed up the narration and basically skip the whole thing. I am utterly relieved by it. I also think it’s quite funny. I wonder how the intro of next episode is going to turn out.

This episode is as usual, divided into three parts. The first part is about Kaguya not knowing what ‘first time’ means. Her reaction after knowing is priceless, with mixed emotion of shock, embarrassment, and enlightenment. You know, when I read the manga, I also thought that they were talking about kissing… because I’m innocent like that heh. Only after the president asks Kaguya “do you know what first time means” did I reevaluated my thoughts and started to think properly. After the realization, I burst out laughing because the joke just got 100 times funnier and I also got to laugh at my own idiocracy. Good times…

The second part of the the anime is just another joke. If you like the comedy of the anime, you’ll enjoy it. If you don’t, you will not enjoy it. Pretty simple. The last part is the heart-warming part. I like how the president unconsciously lets his ego down, probably unconsciously, and just offers Kaguya a ride. Surprisingly, Kaguya sits on her bag. Won’t she damage her bag in some way? Also surprisingly, she doesn’t hold on to anything. Won’t she fall easily? In any case, that scene is very heart-warming and it shows that both the president and Kaguya are somewhat willing to let their pride down at times. 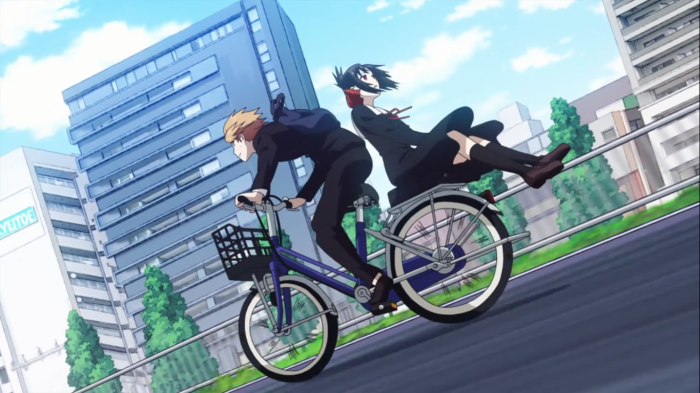 AND THEN THE ED HITS EVERYONE HARD!!! No seriously, that ed is a freaking masterpiece! The movement is so fluid and realistic, and the whole thing is just stunning to watch. I totally did not see that coming. It’s a good thing they choose Fujiwara to dance as it makes sense for her character. I like seeing her dancing for 1.5 seconds in the OP and thought it was just that. Then we are suddenly given a minute and a half of Fujiwara dancing as a gift. It couldn’t be any better.

The ed kinda has the downside to it. It makes the anime way more hyped than it already is. The audience of this anime is clearly divided. I’ve seen some people who don’t enjoy the anime trolling the manga fans because they keep saying that the anime will ‘get better’ but as off now, the anime seems to be stagnant in terms of story. Well to me, it’s essentially a comedy anime and whether or not it ‘becomes better’ down the line, if you don’t enjoy the comedy, you most probably won’t enjoy the anime.

Now then, let me watch Fujiwara dancing for the umpteenth time.