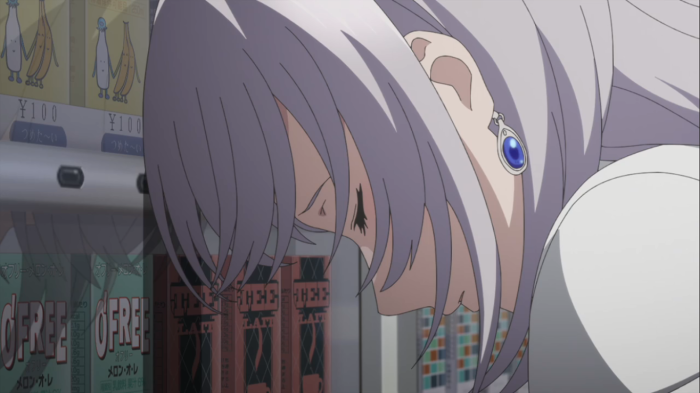 Like I said in the last episode, Hitomi has to deal with Asagi.

Hitomi in this episode is surprisingly proactive in solving the problem. She’s no longer waiting to react to others’ actions, instead, acts first this time. She’s the one who chases after Asagi and tries to work things out between them. Hitomi has changed quite significantly to the point she is the one taking initiative to solve problems, not running away from it. She’s the one making the effort to preserve their friendship. Asagi on the other hand is the one running away this time, avoiding to face the conflict head on. She keeps on running away until Hitomi finally catches her, letting Hitomi do all the work. Her work is to simply accept Hitomi’s approach. She is very happy though that Hitomi takes the responsibility to talk with her. Being extremely emotional, she couldn’t have done it herself even though she knows it’s the most rational thing to do.  To feel a little bit better, she adverts the blame from Hitomi to Shou in a joking manner. But there is some truth to it.

Shou is as dense as ever. Can anyone actually be this clueless? But his friends should help him figure it out man. Sometimes people really are clueless and there’s nothing you can do about it except telling them that they’re the cause of the problem. If you don’t, well drama happens and that’s when we get PA Works anime stories from.

Kohaku suddenly has a brilliant idea of using her magic to invite people to go inside drawn pictures, just like Hitomi accidently went into Yuito’s picture. Hitomi agrees with her and practice very hard on her magic skill. I really like it that Kohaku and Hitomi really are working together as a mage to make their magic work. The first time Kohaku said they should work together, I was really sceptical if Hitomi not just can, but want to work together. Now, they are. Really shows how far they’ve gone, making magic even greater than what Kohaku can do alone.

Inside the picture, the world seems very fluffy. Hitomi can only see the colours of the picture and not anything else. After some time exploring the picture, Yuito is suddenly trapped with child Hitomi. I don’t really get much from the scene because it’s really weird. But we do learn that Hitomi used to like magic. Her mother is the only person of the Tsukishiro family who can’t use magic but she can so she’s very happy. However, her mother might not be. Because of that, she thinks that it is wrong for her to like magic. Magic is what takes her mother away from her so in return, she should hate magic. Now, it’s the complete opposite. The very same thing that is making her mother unhappy is making her friends and herself happy. I guess in the next few episodes, Hitomi will be dealing with this conflict. But I do wonder, did her mother travel back in time too or something? If so did she come back to the present time? What happened? What did Kohaku do to Hitomi’s mother?

Welp, another episode finished. See you next week!