Skip to content
HomePortal is a Very Creepy Game

This time it’s going to be a little bit different because I’m going to talk about a video game I recently played. I think this will be the only occasion where I’ll talk about video game so don’t worry, after this I’ll stick back to my anime format.

Now I’m not a gamer, obviously. I don’t play that much video games. But of course every now and then I’ll play some games to fill in my leisure time and I mostly play the more popular ones. You know, the normal first person shooter games like the Call of Duty and Crysis series, the Command and Conquer genre like the Red Alert series and Generals and sometimes a little bit of The Sims or City Skyline. I’m just a guy who sometimes play games… like normal people. But I do want to share my thoughts and experience of this one particular game that I really like called Portal. 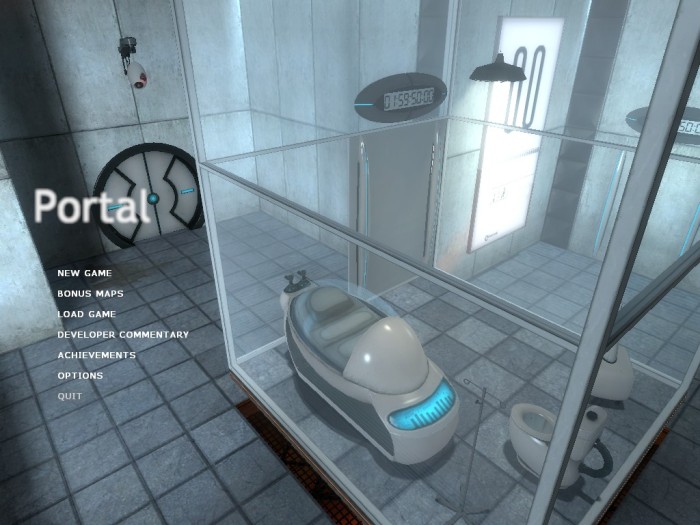 Gameplay wise, it’s a very innovative game to me because I never played anything like it. It’s basically a puzzle game where you can shoot two portals using the portal gun and teleport yourself through the portals. It’s a really simple concept but the puzzles that needs to be solved using the portals are what makes the game much more enjoyable. The puzzles get increasingly difficult throughout the levels but are never too overwhelming. According to the game’s commentary, the levels are strictly and carefully designed to slowly train the players on how the mechanics of the game works and use what we’ve learned in the previous puzzles to solve the upcoming puzzles. Some of the best moments of the game is the eureka moment when you’ve figured out how to solve the puzzles. Oh man it felt really good, sometimes I felt like a genius. I think this is the first puzzle game that I’ve played and yeah, I like it very much. The closest game to a puzzle game that I’ve played is the Tomb Raider games. And I like those too.

I played this game not knowing anything about its story prior to playing the game. I assumed it was just a normal puzzle game where I, as a player just need to solve all the puzzles and after finishing all, it’ll just congratulate me for completing it. I thought it was nothing more than that. I totally DIDN’T know that it has a grander story behind it so when (a little spoilers from here on out) the robot GLaDOS says ‘goodbye’ and pretty much tries to kill me by baking me, I was extremely surprised. The mood of the game suddenly and immediately changes after that event. After that moment, everything feels super creepy. I felt like I was playing a horror game. 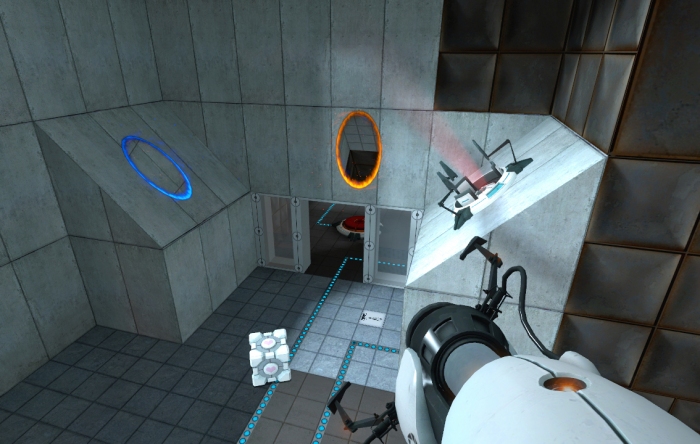 For those who has played the game, you might be wondering, didn’t I notice all the hints and clues beforehand that GLaDOS is the antagonist of the game? Well the answer is no… not at all. Everything, and I mean EVERYTHING about the hints and foreshadowing from the secret Ratman rooms to the sarcastic and sinister comments of GLaDOS went past me. I didn’t find the rooms and I didn’t notice ANYTHING. I was so focused on and blinded by solving the puzzles. So, while many other players would most probably react to the game by noticing weird things and gradually thinks the game is creepy, I on the other hand reacts to it with something along the line of:

This completely blew my mind. The sudden change of the feel and environment, the creepy unknown history behind the tests and other test subjects and GLaDOS being the antagonist of the game blew my mind, of course in a good way. I never actually played a game where there is no game system that talks to me. I don’t know if I explained that clearly. What I meant was, usually games have the game system that talks to you and guides you throughout the game particularly during the tutorial. Portal, however does not. It’s just me and GLaDOS, and she’s the villain of the game. Which means sometimes I have to ignore or go against her instructions. That’s new to me and scary as well.

The ending song of the game, ‘Still Alive’ is really catchy and fun. It got stuck in my head for quite a while now. It also sounds very creepy the first time I heard it because of the computer-like GLaDOS voice. I also like the the story behind the game because it’s not told to us via any cutscenes or anything of the like. Rather, we experience it ourselves throughout the game… which I missed half of the time. But that’s okay because soon after I finished playing, I immediately watched Youtube videos regarding this game and find out all the backstory and the easter eggs. I have to say, knowing all that is very satisfying.

So that’s my experience playing this game. It’s a very good game albeit quite short even for me. But the feeling that I get from feeling like a genius by solving the puzzles and knowing the overall story is very satisfying. I think this is the that impacts me the most so far and I’ll probably remember it for a very long time.