I picked this show mainly because it’s from PA Works. PA Works rarely disappoints me and almost always does things right. The genre of anime they usually produce is also my taste so that’s a major plus for me. So this season, this is the only anime… that I watch… Yeah, I actually don’t watch anime that much. Let’s dive in.

The basic premise of the story is about a girl named Tsukishiro Hitomi who by some unknown reason loses the ability to see colours. She sees the world in only black and white. She is soon transported to the past by her grandmother’s magic to the era when her grandmother was still in highschool. Not knowing the reason or purpose of being transported, she struggles to find a way to get back to the present while trying to adapt to the new world she’s currently living in.

The most obvious standout of the anime is its beautiful animation. This series is just visually stunning. You can watch the scenery of the world be amazed at how it is portrayed. It’s PA Works after all so it’s to be expected.

After watching the first episode, I think it’d have more impact if the show is in black and white until the scene when Hitomi sees Yuito’s art. I think it would make the audience resonate more with how she feels to be able to see colours again for a short period of time. I could be wrong though. 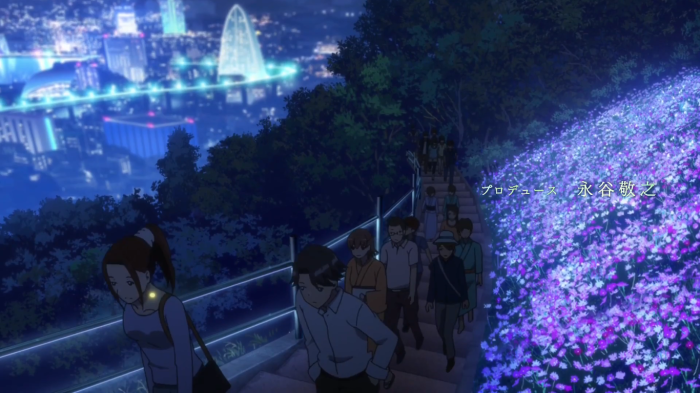 Also, I honestly would love to see Hitomi interacting with the ‘current’ world more. It would be as simple as what is shown, opening the window, thinking that the school table is interactive. It would be hilarious and fun to see her fail at those attempts more while simultaneously understand that this world is much different than hers. But of course, comedy is not the focus of the anime and it would take unnecessary time to show all that. I am satisfied with what has shown but I hope the anime would slide in some more of that subtly.

Overall, I’m enjoying this anime so far and I can’t wait to see what it has to offer. This is my first time doing a first impressions of currently airing series. It’s kinda fun, having an excuse to post something on this blog. I might continue reviewing this anime every week so look forward to that. Now we’re going to the more spoilery part. But it’s only until episode 3 so even if you haven’t watched this, I don’t think there’s any need to worry about the potential spoilers.

Magic is common in the universe because everyone treats it as an everyday thing. It seems that everyone can use magic by pouring the correct colour of magic dust (I suppose that’s the name) but only mages can create the magic… sometimes by cooking it. The Tsukishiro family is the only mage we’re introduced to so far but seeing how common magic is, I’m sure we will be introduced to other mages as well.

Asagi is jealous. We can clearly see that she’s not entirely fine with Hitomi being friendly with Shou. Because of this, a love square is expected in the future. But knowing PA Works, the love triangle will probably be much more convoluted than that. Romance is actually the element that excites me the most while diving into this anime but the first three episodes proved that it doesn’t even need that element for me to enjoy this show. That said, it’ll probably have some romance so I’m looking forward to that.

Hitomi is talented in magic without even realizing it. We can see that she can walk on water without using the correct colour of magic dust. She also unconsciously summons snow while walking on the water out of sheer will. This is probably the main reason why her grandmother sends her to the past in the first place.

Hitomi is depressed. The reason is quite obvious, she wants to see colour but can’t. Adding to that, she’s now trapped in the ‘old’ era and she can do nothing about it except waiting for her grandmother who is in another country. She also hates magic because both the time travel and her colour blindness are caused by magic but isn’t explained how yet. However, with Yuito’s colourful art and the Photography and Art Club, she is given a little bit of hope while enduring her sadness. I’ll probably elaborate this more on future posts. (is it only Yuito’s arts that are in colours to Hitomi or is it all the screens?). Lastly, what exactly is the English version of this anime called? Why is it changed from Irozuku to Iroduku?

Welp that’s it from me. Again, I’ll most probably review future episodes of this anime so stay tuned. And goodbye for now ~