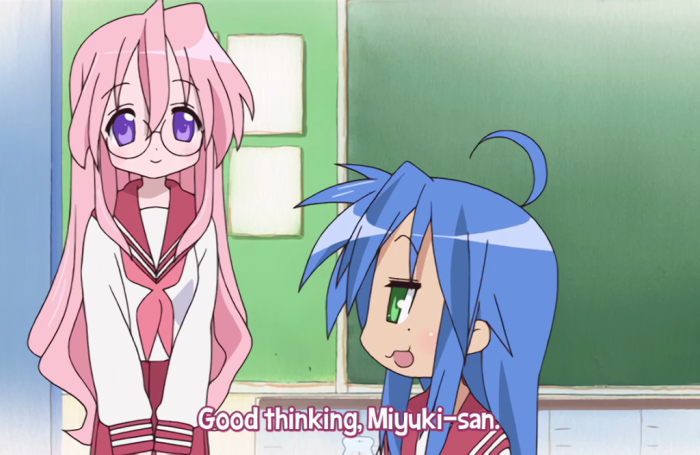 I always wonder, if I live in Japan and abide by the their honorifics rules, how would I call people? To know the answer, we first need to know the basic of honorific rules in Japan. We’ll go through the most common honorifics. This might turn into a ramble about myself and my life. Because it will. Let’s just get to it.

The most basic and common honorific that people use is “san”. It can be applied to almost everyone. It shows distance if two people use “san” to call each other. People usually start calling people with “san” when they first know each other but after they know the person more and become closer, they’ll start to use other honorific like “kun” or “chan” or drop the honorific altogether.

“Kun” implies that the person is more familiar than “san”. It is usually addressed towards male but it can actually used for both male and female. Sometimes it is used to address people with lower position.

Another commonly used honorific is “chan”. This also implies intimate relationship between two people. It is used among friends and are seen as a cute way of calling people. If all the honorifics I’ve mentioned are ranked by familiarity, it would be “chan” then “kun” and the most unfamiliar is “san”. (If I’m wrong please correct and educate me).

Then there is the first and and last name or the given name and family name difference. In Japan, this is a really big deal. Like “san”, calling a person by their family name shows respect and distance between the caller and the receiver and calling by their given name means that the caller and the receiver are quite close and intimate. Adding this to the “san”, “kun” and “chan” combination, you get yourself a very complex hierarchy of importance and meaning.

There are other honorifics such as “sama”, “dono” and many other which I myself don’t know because I’m not Japanese but I think I’ve covered the common and most important honorific there is. Now back to my initial question, what would I most probably call people by if I live in Japan and am a Japanese.

Welp let’s look at how I currently call people in my country and within the context of our local culture.

As for my family, I have a very specific way to call my family members. Calling my parents is usual ‘mom and dad’ but siblings are a bit different. Since I’m the eldest, all my younger siblings would call me ‘brother’. This is usually the case for most family here. The youngers would call the elders by brother or sister. If we translate it to the Japanese language, it’s the normal ‘onii-san’ and ‘onee-san’. The elders, however would only call the youngers by their names. This rule also applies to extended family. I would call my older cousins as brother and sister. Because they are many, I would call them brother and sister followed by their name. So it would be brother Rizal, for example or sister Farah. This sounds a bit weird in English but in Japanese it could be simply translated to Rizal Onii-san and Farah Onee-san. Now, this rule for extended family doesn’t really apply to everyone here though. In fact, I haven’t actually met any other family who call their older cousins by brothers or sisters. They just call them by their names. My family is the odd ones out here.

As for names, we actually don’t have family names. We only attach our father’s name with our name but are separated by a ‘Bin’ if you’re a guy and ‘Binti’ if you’re a girl. So if my name is Rizal and my Father’s name is Zafir so my name would be Rizal Bin Zafir. However, we usually have more than one name so my name would most likely be Muhammad Rizal Azami Bin Ahmad Zafir Qayyum or something like that. For girls, it’ll be their name and their father’s name separated with ‘Binti’. So yea, we have long names for some reason but don’t inherit any given name.

Malaysia is a very racially diverse country so those rules only apply to Malays. For Chinese, they have their given and family names and for Indian, they seperate their names with their father’s name with ‘son of’ or ‘daughter of’

When it comes to friends, I personally don’t call people by their nickname even if we’re close as hell. Even if we’re ‘best friends forever’, I never actually call them by their nickname. It’s very uncomfortable for me and for some reason, I think it’s rude to do it. We don’t have any honorifics for people of the same level as us, higher than us and lower than us. Out of respect, we usually call people by Mr. or Mrs. but that’s all. We don’t address the older ones as brothers or sisters. We just call them by their names. But with strangers, we call them brothers and sisters by default despite not knowing their age. It’s just what we do.

With all the context that I’ve given and my attitude towards calling other people, I think I know what I would call people if I use the Japanese honorifics. I would most likely use “san” all the time and OCCASIONALLY use “kun” for my close friends. If we’re super close then I might drop the honorifics and call them by their first name but I think this would only happen very rarely. Also, it will be extremely difficult for me to let go of the “san” when it comes to calling girls. Maybe I would call all girls by “san” except for my girlfriend… hmm…

For my seniors, I would call them senpai all the way regardless of how close we are or we’ve become. I don’t know, maybe I’m just really good at distancing myself from other people. I think I would be using more familiar honorifics only with my family and extended family members. I might call them by their first name just to show that they are close with me because they are related with me by blood.

One thought on “Me and Japanese Honorifics”