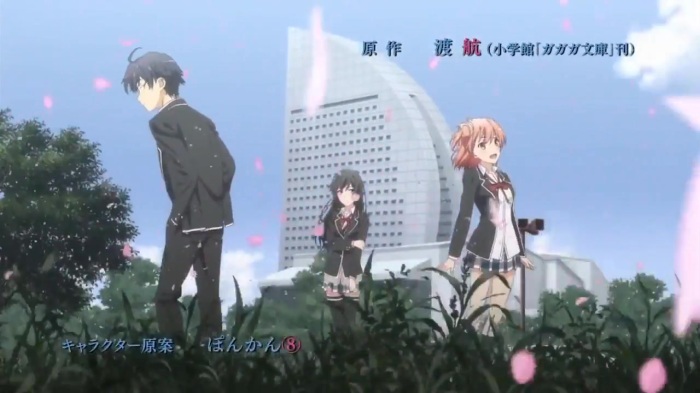 Hey everyone! So today I’m going to examine the meaning behind the lyrics of the opening song of an anime called ‘My Youth Romantic Comedy is Wrong as I Expected’. I will analyze the reasoning behind the lyrics and go deeper into it. I really love this series and I recommend all of you to watch it. Bear in mind most of the messages from the anime are very implicit so you have to observe carefully to really understand the story. Don’t expect too much though because I’m not really good at this. Just thought I’d try. Lel. If you want to watch the opening of this anime, you can watch it here.

I’ll look for it in the promised land

So what does this mean… I don’t know hahaha… Damn that’s a really good way to start an analysis. But seriously I have no idea what this means. It probably suggests that the main character will look for ‘it’ in this world. What is ‘it’ then? From my perspective, it could only mean that the main Hachiman is looking for happiness and genuine relationship with other people. But other than that… I don’t really know… 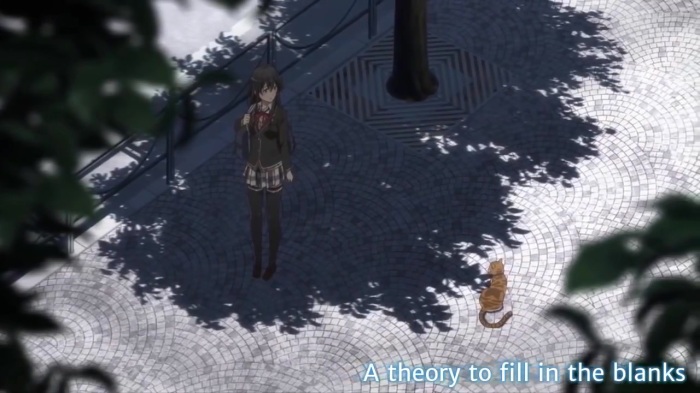 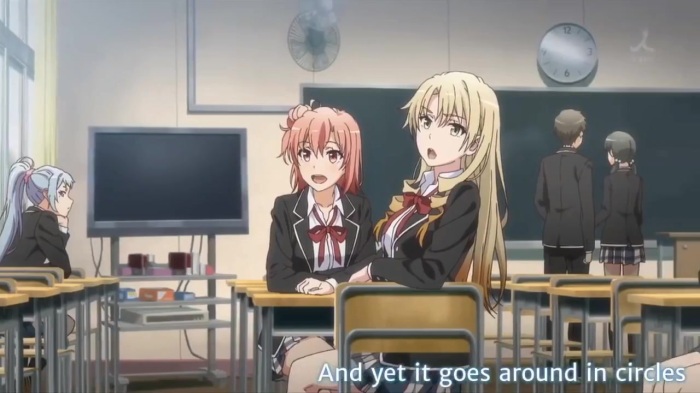 A theory to fill in the blanks, Ought to be the perfect fit, and yet it goes around in circles

A theory to fill up the blanks is Hachiman, the main character trying to read between the lines when people take actions. In his eyes, every action that other people do has a different intention and hidden agenda. All their actions must have an ulterior motive and those motives MUST be bad. He ‘fills in’ the blanks with his own interpretation of their actions and because of his past traumatic experiences, he never interprets them as anything positive.

His negative interpretation of others is a defensive mechanism for himself. He tries to not be hurt by other people. He always thinks that his interpretations are true or at least true enough for him to avoid being hurt. That what it means by ‘Ought to be perfect’. However, his way of filling in the gaps and his way of negatively interpreting others backfire him as there are people who genuinely want to do good for him. There are people who want the best for him but he doesn’t see it and doesn’t appreciate it. In fact, he rejected even the possibility of it. This is because when people actually do good to him even as simple as talking with him without any apparent reason, he’ll start to think that the person is trying to get an advantage from him. His theories ‘go around the circle’ as he keeps on overlapping the truth which is the real intention of the person with his pessimistic interpretation. 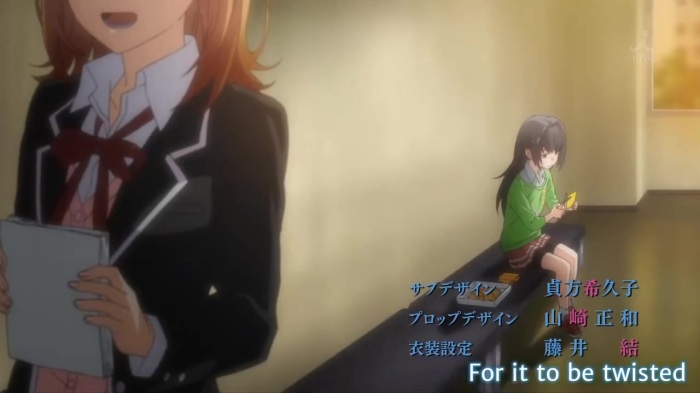 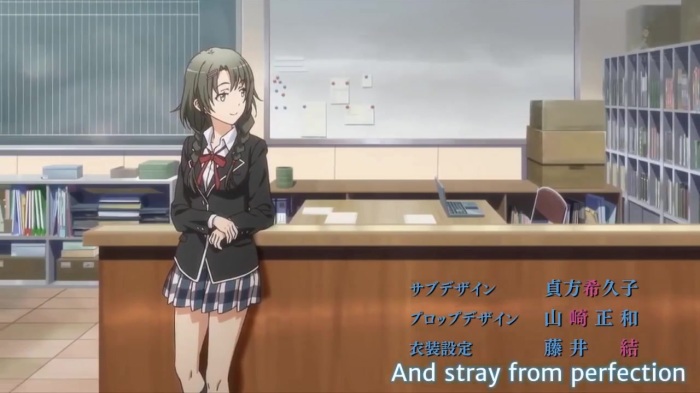 The future is an unknown beast, all it takes is a crack, for it to be twisted, and stray from perfection

It is shown that Hachiman despises the future because it is not known and it’s always different from what he predicted. Not just this, he even predicts the worst case scenario of what the future could be. I explained that he interprets and predicts others in a very negative way. Well he does not just predict people, he also predicts situation. And since he is a pessimist, he can’t see the future in a bright way. Where does this mentality of his come from? It comes from his past traumatic experiences. This anime focuses on his past crushes and friends. During his middle school years, Hachiman was not as pessimistic. He tried to make friends, tried to confess his love to his crush, and generally see the world brighter and more casual. But after getting rejected multiple times and outcasted by his fellow classmates, he then sees the world differently. He set his expectation very low in order to avoid getting hurt. From then on, he makes himself believe that everyone hates him, all situations won’t go his way and he needs to be content with that. He’s scared of the future because whenever he dreams of something good to happen, it always doesn’t. He also hates the past because of his experiences. The only time that he likes is the present, because it is the only time that things are certain. 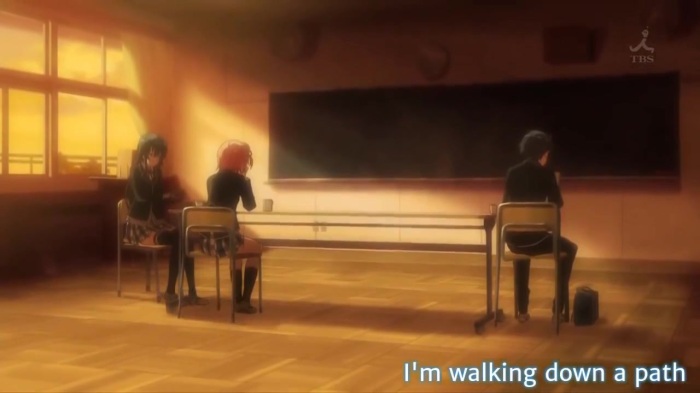 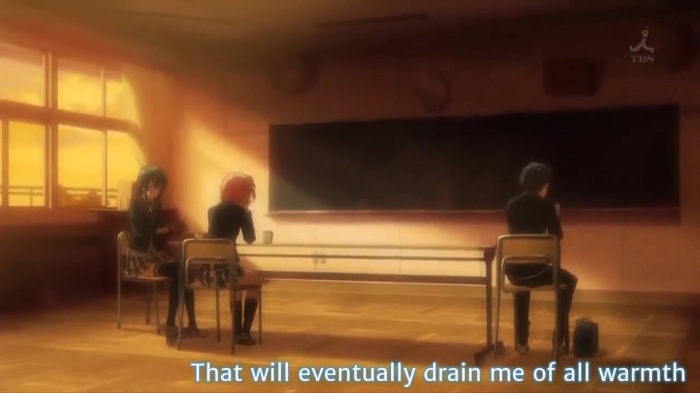 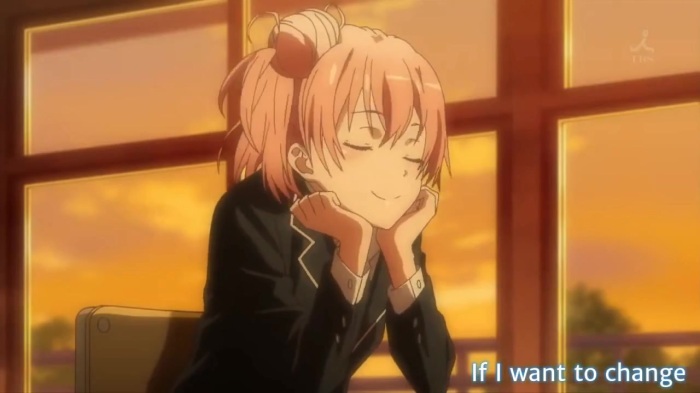 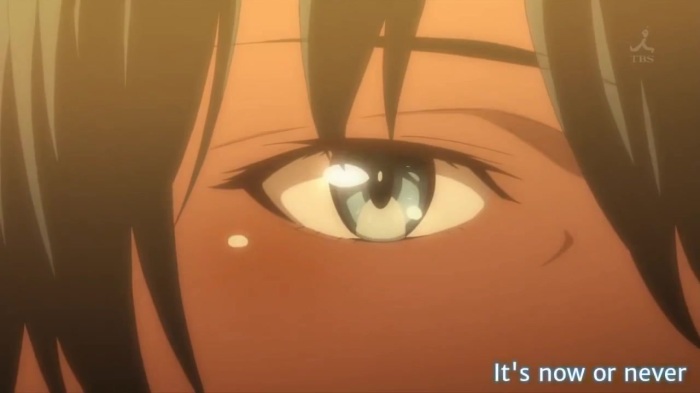 I’m walking down a path, that will eventually drain me of all warmth, if I want to change, it’s now or never

He said he is walking down his path that will eventually drain him of all his warmth. What does this mean? It means that the way he lives and his ideology are draining his energy day by day and one day, he might actually implode. What is his way of living? What’s his ideology? His first ideology is that he is worthless and no one cares about him. The way he solves problem proves that. He always makes himself as the deliberate villain in a situation. He makes himself the sacrifice of the situation. For example, during the cultural festival in the first season, he harshly criticizes Sagami’s inability to be an efficient leader despite being the president of the committee member of the cultural festival. He blatantly says that Sagami only wants to be the highlight and is using the cultural festival as the medium. By doing this, everyone who was there during his criticism hates him for his bold action and the word quickly spread. He managed to become the most hated person in the school. Second example is when he made a fake confession towards Ebina in front of Tobe who actually likes Ebina. He does this so that Tobe “doesn’t get rejected” by Ebina knowing that Ebina doesn’t want to be with anyone at that time. However by doing that, Tobe and his friends would think that he really is in love with Ebina and they would hate him for stealing Tobe’s confession.

That’s right, Hachiman always sacrifices himself by being the villain in any given situation. That’s his default way of solving problem and to him it’s all justified because he thinks that no one likes him, no one cares for him anyway. Why would he concern over himself, a person who no one cares for? He too doesn’t like himself. He thinks being the scapegoat truly deserves him. However, he also interprets other people’s intention as a defensive mechanism to avoid himself getting hurt. He is contradicting with himself. True enough, if he keeps on thinking and acting this way, his energy will eventually drain out.

In the second season, he realizes that he can’t continue living like that. He can’t continue thinking that he’s worthless. He has to change in order to survive in this challenging world or at least, to improve himself as a person. He wants to change. And the first step he takes is admitting that he was wrong and admitting all the things that he denied he wanted. He wants to change now before it’s too late.

I don’t want an ideal replica, all I need is something real, If I want to change it’s now or never

However deep inside, he actually craves for a genuine friendship. He wants to have real friends who talk to him just because he is himself, not because of any other obligation. And in the second season, he is heading towards it. He slowly changes himself by taking very small steps at a time. In episode 8 of the second season, he admits himself being wrong all this while and confesses to Yukino and Yui that he wants a ‘genuine article’, meaning that he wants them to be his real friends, instead of just clubmates. He confesses that he craves for a real friendship, and that he is very lonely. This is a very big step for him. He is determined to change. 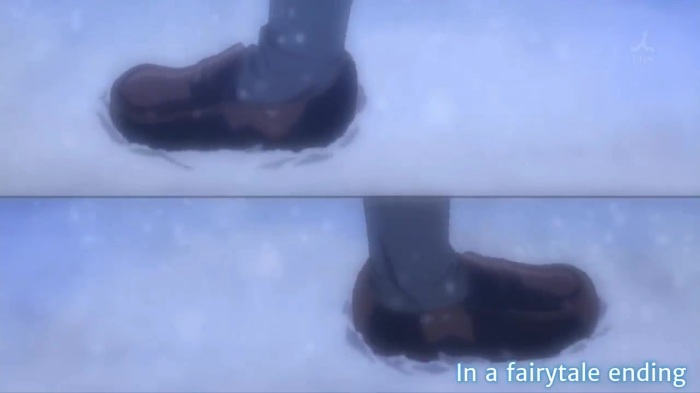 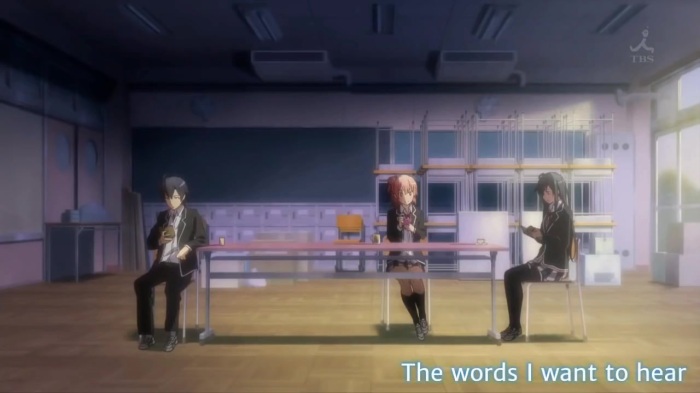 I’ll go look for it in the promised land, but you whisper to me in a fairytale ending, the words I want to hear.

Now honestly I don’t know what this means. What I can personally conclude from my lack of understanding is that Hachiman is searching for the ‘genuine article’ but his other side is telling that those things are too good to be true. They’re almost like a fairytale. Another translation of this lyric supports my explanation. It goes “I’ll head over there to search, but that’s like a time-old fairy tale”. It surely shows that Hachiman is still reluctant to compromise everything he believed in.

Well that’s my analysis on the lyrics of the opening of My Youth Romantic Comedy is Wrong as I expected season 2. again if you want to watch the opening, you can watch here. All those words of the lyrics come from Hachiman himself and from those words, we see how he saw the world in season 1 and how he wants to change himself in season 2. All of his inner conflicts are in the lyrics of the song and I think that’s pretty amazing. I respect the writer of the song (who is it, Google? Oh it’s Yanagi Nagi). Also, I really love the series. The characters are very deep and complex especially the main character, Hachiman. I would really recommend all of you to watch this series.

Do you have anything to add on the meaning of the lyrics? If so, do not hesitate to comment below!