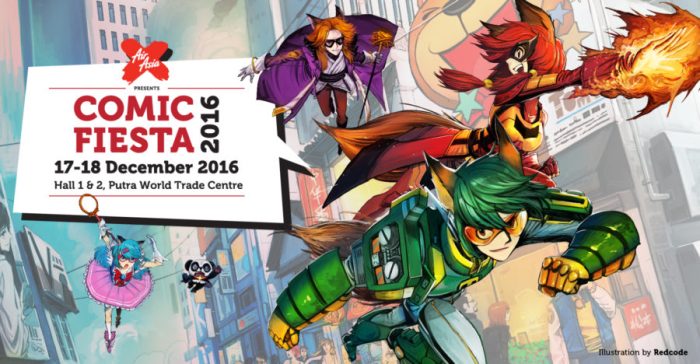 Where do I start? I guess I’ll start with explaining about the convention first. In my country which is Malaysia, there is only one big anime convention that pretty much every anime fan here go to. The convention is called Comic Fiesta. It is held annually in December and lasts for two days. It’s more of a comic convention than an anime convention but people here don’t read comics that much. We watch more anime instead.

I went to this convention last year and I think this year is much more fun and organized. Last year was totally hectic. This year, we went to the convention well prepared. How? By buying the early bird ticket and arriving at the location much earlier. We were very excited about this event. We arrived at 7.45 a.m even though the event only started at 9.30 a.m. I guess we arrived pretty early but there are many others who had arrived way earlier than us. They’re… they’re very passionate. Upon arriving, we quickly queued at the entrance. Since it’ll be more than an hour before the event actually started, the visitors are allowed to sit down on the floor and wait.

When it was finally 9.30 a.m, (it was actually a tad bit earlier than that), the event finally started and we were allowed to enter the building. So what did we do first? We went to the food stalls and bought some overpriced food! Why? Because we didn’t know where to go. Like last year, we didn’t actually have any specific location to go or booth to visit so to avoid the crowded place, the food stalls were the first place that we went. Not long after, we started our journey… which was wandering from booth to booth, the only thing that we could do.

I had this one particular philosophy which was ‘when found something interesting, just buy It’. The reason was because the place was so crowded so I knew that if I said ‘I will get back to this particular place and buy this particular thing later’, it’d never happen. So yeah, whenever I found something even the slightest bit interesting, I bought it. I did manage to refrain myself from buying anything super expensive or overpriced and only buy things that were within my budget. Most of the things I bought was from the anime Re:Zero because the anime is really popular.

Now let’s talk about the cosplayers there. There are many cosplayers that I wanted to take pictures with but I didn’t because I was a freaking coward. I realized that the sole reason they cosplay is because they want people to take pictures with them so it should be pretty easy to approach them right? Yet I didn’t. I think most of the cosplayers were low on budget because most of them are not fully decorated. Regardless, I like looking at them.

And so we wandered around buying random things until night. During the night, there were band performances from various bands that I’m totally not familiar with. The performances were pretty awesome. There were a couple of songs played that I recognize but most of them, no. I just enjoyed the music. A Japanese indie pop band was also invited to perform and I know absolutely nothing about the band. The band is called Fhana if any of you are familiar with them. I had never actually went to any kind of concert before but I had fun. This was the first time I went to a place so loud I couldn’t even hear my own voice when I was talking.

The crowd was pretty… low on energy I would say? I mean, they weren’t jumping to the music. My friends and I were at the back of the floor so we could only watch from afar. At first I too was not doing anything. I just listened to the music. But as time went by, song after song played, I thought ‘the heck man! I only go to a place like this once a year. Let’s enjoy to the fullest!!!!’. And I jumped to the beat like crazy with two of my friends. We didn’t even know the songs but we jumped anyway and it was pretty exhausting. We were the only three people at the back that actually jumped. At the front, it was getting more and more crazy but at the back… well at least the three of us did something right?

And so, the day ended. 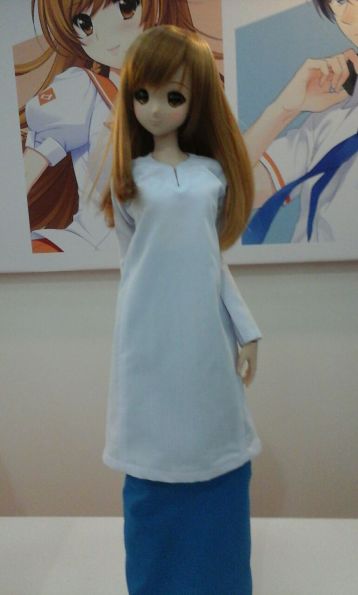 On the side note, this is our country’s school uniform. For Muslim, you wear the traditional Malaysian dress called Baju Kurung and then wear a scarf on your head (on the right). If you’re a non Muslim, you wear either one that you like.

On another side not, maid café… I have the urge to actually go to one but I don’t know, something inside me just refrained myself from going. Besides, the foods and drinks are overly overpriced anyway so…

On the second day, we didn’t do much. We didn’t go early in the morning either. Why? Because we were lazy. Other than that, we pretty much covered every area on the first day so we basically didn’t have anything new to buy anyway. We went there around 3 o’clock and started wandering around. This time, we wandered more around the doujinshi hall than the merchandize hall. Seeing the works of fans really inspired me and I kinda wanted to buy everything that I recognize. But of course, I didn’t because I just didn’t have enough money. They were all spent on the first day. I did buy a few more things though.

That day, I was brave enough to approach the cosplayers. I managed to take pictures with a few characters that I recognize. One of them is Yazawa Nico from Love Live! School Idol Project. Next year, I’d probably just barge into the cospalyers and take pictures with them. Since I realized that it’s actually pretty easy.

The day pretty much went by fast. We wandered around, bought some stuff, captured some pictures with cosplayers and before we know it, it’s already night. There was another performance on the second night but it was not a band. It was a DJ and a singer singing some sort of karaoke I guess?? Oh his auto tune was horrible. Now, I’m not a fan of techno and club music style so not long after watching the performance, we decided to go back home.

And yeah, that’s pretty much my experience going to an anime convention for the second time in my life. It was fun, really fun and I’ll probably visit this convention every year. Now some might wonder about my first time going to this convention. Welp, I actually wrote about it last year but for some reason, I didn’t post it. So I decided to post it here tomorrow.

This is the end of my post. I’ll leave you with one question. What do you guys usually do and buy when you go to an anime convention?

2 thoughts on “My Second Time Going to an Anime Convention”