Skip to content
HomeTari Tari: A Realistic and Heartwarming Tale of Friendship

These five students are in the same class and later on, the same club because of different reasons. Konatsu wants to create a vocal music club and asked her best friend Sawa to join her. Wakana is invited to join the club because of her musical talent. Taichi joins the club hesitantly after being challenged by Konatsu and Wein joins the club because… well, just because. Joining the club, they all slowly familiarize with each other and become closer. As close as a highschool friendship can go that is.

For all its worth, I like really this anime because it depicts a pretty realistic highschool friendship. We all have passed this phase, having a group of friends which are pretty close but in reality, aren’t actually very close. We consider each other as friends only because we’re in the same class, or we’re in the same club, or we’re roommates. That’s pretty much what this anime is all about. So, these are the reasons why I like Tari Tari.

In the beginning of the anime, all the characters are very distant with each other as they only see each other as classmates. We can see that the only ‘friends’ are Konatsu and Sawa. Wakana, as she is a girl, is closer to them compared to Taichi and Wein. They only become considerably close after they have all become the members of the vocal music club. However, compared to many other friendship anime, the closeness of friendship in this anime is relatively further. Not to imply that they have weaker bond but it definitely feels more realistic. It really feels like they are a bunch of highschool friends who doesn’t actually know each other very well aside from being in the same class and the same club.

The Subtlety Of Helping Each Other

All the characters have their own personal problems and as friends, they do try to help each other out but they can only help to the extent of what they can. They don’t really do much for each other as they don’t actually understand the problems that the other person is facing. Nevertheless, they still want to help. In terms of giving advice, their advice is usually not spot on but the advice indirectly made some of them realize what the root of the problem is or what they should do in order to make things right. In other times, They help each other without even realizing it. Case in point, Konatsu insisting Wakana to finish her ‘masterpiece’ music.

I think the subtlety is really great as it depicts how people usually help each other. When we don’t understand much especially of that age, all we can do is give advice from our point of view of whatever problem appears. It may not be the best advice and it may not be accurate but it’s all what we have and that’s the only way we can help.

Not Too Overly Dramatic

Like I’ve mentioned, all the characters have some sort of personal problems. These personal problems have different level of tragedy. This reflects that some might only have minor or little problems in their lives but some might face a more tragic problems. Even with the different level of tragedy, it doesn’t make us audience care less for the characters who face less tragic problems. Instead, we would pretty much care for all of them equally. The drama in this anime is not too overly dramatic. Since the level of problems faced have different level, the drama too is diverse. It  has a pretty heavy drama but you’ll also be entertained by the more lighthearted drama. 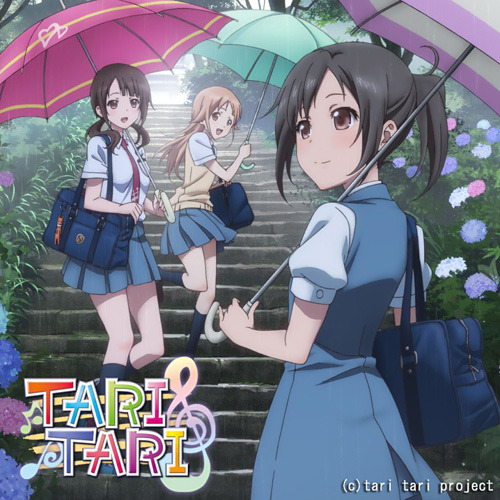 Happy Ending But Not The Best Case Scenario

Perhaps the best thing about this anime is the ending of each arc and the overall ending. The ending of each arc might be on a happy note but it is not the best case scenario. This is clear especially the ending of the anime. Yes, the characters are all happy in a way that they kinda get what they want to do but it could’ve ended on a way happier note. There are always something that could have been better if some circumstances didn’t occur or some people didn’t interrupt. Heck, the ending could even be perceived as a bad ending but because the characters perceive it otherwise, it turns to be, well, a happy ending that is not the best case scenario. This series also teaches us to let go of what we can’t control, whether it’s the weather or the strict teacher or the people who have all the power in the world, we just have to let go of everything we can’t control and appreciate the little positive things that we always and usually take for granted.

Tari Tari was such a great experience. The pacing of the story might be a little awkward in the beginning for some but you’ll find it necessary later on. The drama can be very touching at one time but very lighthearted at another. I highly recommend everyone to watch this series.