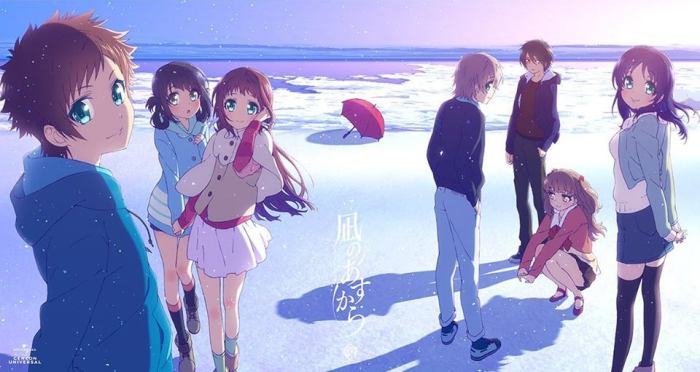 Four middle schoolers Hikari, Chisaki, Manaka and Kaname have to move to a new school on the surface after their school is closed due to low number of students. Being sea dwellers, they find it a bit hard to accommodate and comfort themselves in their new school as both the sea dwellers and the surface dwellers have prejudice attitude towards each other.

The first surface dwellers to actually become friends with the sea dwellers is Tsumugu but this actually only makes their relationship much more complicated.

I watched a pretty similar anime called Anonatsu de Matteru/Waiting in The Summer and thought that the love triangles in that anime is not enough. And then I watched this anime, Nagi no Asukara and thought “this is exactly what I was looking for all this while!!! All the very deliberately convoluted love triangles, this anime is perfect!!!” Don’t get me wrong, I really like Anonatsu but I think I might like it more if the love triangles are more complicated and I think that the ending is not as satisfying.

Nagi no Asukara is primarily about romance but it’s not apparent until a little later into the series. The first focus of this anime is racism. We have the sea dwellers, people who live in the sea and the surface dwellers, people who live on land. The sea dwellers have ‘ena’ which is attached to their skin to help them breath underwater. They can only be on the surface for a limited amount of time because if they leave the sea for so long, their ena will dry up and this will be hard for them to breath. They need their ena to breath basically.

When the four main characters from the sea start schooling on the surface, they are treated with prejudice attitude by the surface dwellers. This isn’t any different than what the sea dwellers do towards the surface dwellers especially the main MAIN character Hikari. There was a very long history and rivalry between the two types of people so getting along with each other is really a hard thing to do. I mean, racism man. You know how hard it is to solve the problem right? The anime handles this issue very smoothly. The racisms between them aren’t purely because of immature-ness, there are reasons behind it and those reasons are very reasonable for both sides. In this anime, it’s the kids who are able to break the barriers between the two first and soon after, the adults are able to do so too. That’s not after they are insisted by the kids countless times and after some cultural and spiritual activities are involved. 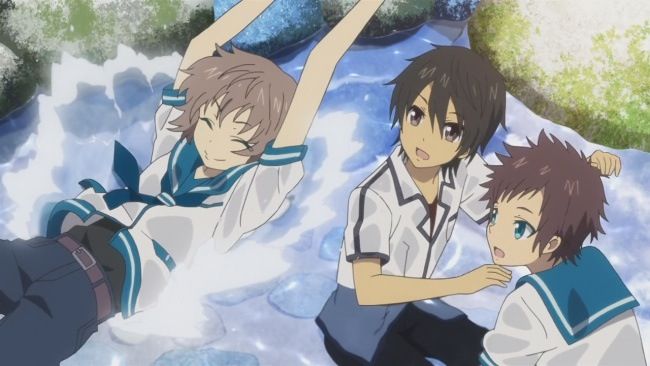 Talking about spiritual activities, in the world of Nagi no Asukara, there are some supernatural element in that I find very interesting because it has a major contribution the main plot. You’ll be asking a lot of questions regarding this supernatural things but you won’t get the answers to your questions until the last episodes of the anime. It’s okay if you don’t understand many of the supernatural things though because the main focus is the romance.

Now we go to the main plot of this anime that is the romance. The main romance does not start right off the bat. The anime starts with the sub romance between Hikari’s sister Akari, a sea dweller and a guy named Itaru, a surface dweller. Like I said, the anime starts with the issue of racism but in this case, it’s racism plus love conflict. While the anime is dealing with Akari’s love conflict, it also deals with racism at the same time. It has enough time to set up the status quo of the characters before diving into character development and the actual main romance plot. This, to me is very clever. The characters also grow through the conflicts.

The main romance in this anime is just prefect I love it so much. It starts off with a ‘fate-like’ fantasy boy meets girl encounter that’ll make you think ‘these two will definitely end up together’ not knowing that it is actually teasing you with anime cliché… yup, they sure got me there. There are so many one sided love and love triangles, you can’t help but want to at least predict who will end up with who if not shipping them like crazy (I did the latter). The romance is complicated yes but that’s not all the reason I like about it. Rather, I like it because of the characters. The characters made the love triangles seem believable. They made the supposed mundane love story alive and exciting, full of twists and far more intense. The direction of the romance if really unpredictable much of it is because the involvement of the supernatural element by the middle of the series.

For the characters, I really can’t talk about the characters without spoiling anything. The characters really feel like they are people. You can’t really describe them with only a few sentences. All of them are complex. Adding this to and already convoluted love triangles and messed up status quo especially by the middle of the anime, imagine how good it actually is… I can’t give away its greatness. You should just watch it. You’ll grow attached to the characters much faster than expected and you’ll feel their pain, misery and helpless-ness. In other romance anime, I will always have a relationship that I don’t want to happen (but in the end, it happens anyway. I don’t really know why everything that I don’t want to happen seems to be the thing that’ll always happen) but in this anime, you’ll pretty much support everyone. Every character in this anime is painfully hurt as most of the time, the person that they like likes someone else and it hurts all the more when the characters know who their crushes have a crush on. Well, when you like a particular person, you’d definitely observe that person and inevitably notice who that person actually likes… and when you know it’s not you, it hurts… really bad.

I notice that many people don’t like Hikari in the beginning of the show. I can see why but to me, it is refreshing to have a main character with an anger issue in a romance anime. It also makes the whole racism issue more realistic. If he didn’t have an anger issue, the sea dwellers would seem like the good guy and the surface dwellers would seem like the bad guy. That’s not a good way to deal with racism. 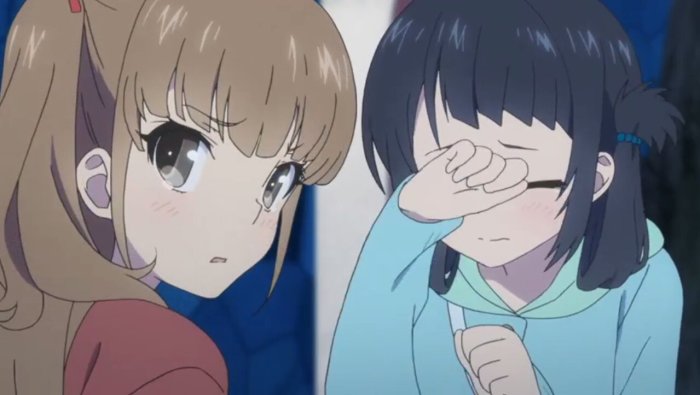 The character development is very good. It’s not obvious in the first half but in the second half, they really change so drastically or rather, they have to change as their surroundings have changed. In the first half, the focus of the love conflicts are between 5 characters but in the second half, the two girls by the name of Sayuu and Miuna are added into the conflicts. These two girls don’t seem to be that important because they are kids. How can kids be important? But yeah, they are significant to the main romance. I totally did not see that coming and I’m really glad they take that direction. It makes the whole love triangles way more exciting!

What caught my interest about this anime is obviously the stunning animation. The animation is freaking great it’s on par with Makoto Shinkai’s movies! The scenery is darn beautiful I can’t get my eyes off the screen. To add to that, the music is amazing too! The opening and ending is kinda a ‘must not skip’ as It sets up the atmosphere before unfolding the story. The standout songs are the second opening and the first ending. My favourite song is the first ending, Aqua Terrarium. The first 30 seconds of the song is so memorable it keeps on looping in my head when I was closing eyes before falling asleep at night even days after I finished this anime. It’s just so beautiful! I heard it very vividly as if I was actually listening to it through a headphone. It makes me feel so calm and peaceful but also sad at the same time. The song feels like it has full of drama basically.

This is easily my favourite romance anime. It is perfect in every sense of my desire. It has just about everything that I want. There’s drama, there are love conflicts as well as racism which are handled pretty smoothly. The characters developments are great. If you’re a fan of innocent romance drama anime, you’ll definitely love this anime. If you don’t, I don’t think you can resist the astonishingly beautiful scenery and animation the anime offers. With all this amazing animation and beautiful OST that gives me goose bumps whenever I hear them, I couldn’t resist giving this anime a perfect score because everything is beautiful. From the story to my overall enjoyment. So in conclusion, just watch this little piece of masterpiece.

2 thoughts on “Nagi no Asukara Review”