The story revolves around Nakagami Shinichirou, a highschool boy and his three love interests, Yuasa Hiromi, Isurugi Noe and Andou Aiko. That’s all. That’s pretty much the whole story.

I don’t know why but I was in a time where I felt the hunger for romance drama anime. I desired it, felt the need for it. Maybe because I have just finished Code Geass, a pretty badass, convoluted and depressing anime recently, I just need something more toned down. After going through some anime lists, I decided to watch this on a whim and I’m really really glad I watched this. This could be one of my favourite anime of all time!!

Now, while the synopsis up there sounds like this is a bland, boring and cliché romance anime, it certainly not. The only cliché trait available is the setting. Let’s talk about the characters first.

The female characters, I’d say the anime actually has some stereotypes of characters and takes it to another level. We have Yuasa Hiromi who is a quite yet athletic girl. She lives with Shinichirou after her parents died and  goes to the same school as him. They’re both in the same class. She has long been interested in him but tends to avoid him for some reason. The reason is a bit shocking to be honest, I didn’t expect that. I was downright rooting for these two to end up together especially during the first half of the show because she’s very likable. I really like her soft-spoken and quite attitude. Not to mention, she barely raises her voice (actually in this anime, everybody rarely raises their voices but she does it less than others). She does cause some troubles. She causes them because she sometimes takes actions out of jelousy and she is told by Shinichirou’s mother a thing that is really difficult for her to accept.

Next we have Isurugi Noe, a cheerful and quite bizarre girl who can’t shed tears anymore because she believes she gives her tears to her dead grandmother. She encounters Shinichirou in a quite strange way and develops a love feeling towards him not long after. She is the one who actually pushes him forward telling him that he can fly but he just doesn’t know it yet (I don’t really understand what that means though). She also seems to be able to see right through people. That means when you lie to her, she can freaking tell that you are lying even though you yourself don’t realize that you are actually lying!!! I rooted for her during the second half of the series. I didn’t root for her before that because I also like Hiromi. I actually like both Hiromi and Noe and I kinda don’t know which one I like more.  I don’t know which one to choose.

Lastly, we have Aiko, Shinichirou’s childhood friend and also a girlfriend of Miyokichi, who is Shinichirou’s best friend. She is very likable too (Every girl in this show is likable, you want to root for all of them) but she doesn’t stand out that much in this series and she is given less screen time than the rest of Shinichirou’s love interest. She accepts Miyokichi to be her boyfriend only to be closer to his best friend Shinichirou. She admits by the end of the series that she does selfish things as she practically uses Miyokichi to pursue her ideal objective. 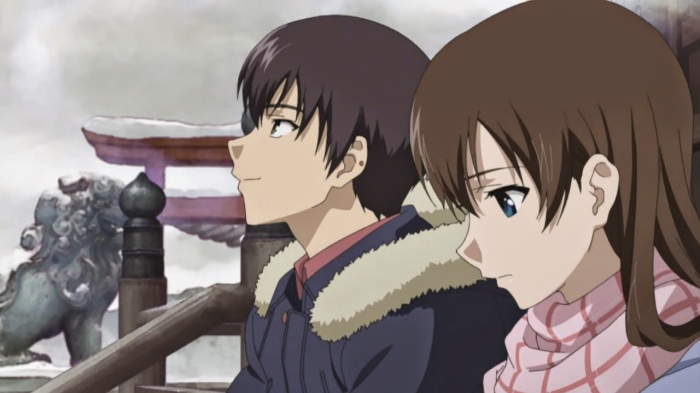 Our male lead, Shinokuchi Nakagami is a normal higschool boy with drawing and dancing talent who has a crush on Yuasa Hiromi since long ago. He also thinks he likes Noe after being forced to be around her many times. At the latter part of the series, he is actually trying very hard to figure out who he truly likes. He is dealing with his own inexplicit feelings which I found very intruiging because even I, the audience couldn’t decide who to choose. And it is not obvious who he will choose so you will be left there wondering about that until the final episode.  What I like about him more that many other male lead is that he is not so oblivious to the people around him. He notices others’ feelings. He actually notices Noe’s romantic feelings towards him, not like many other severely oblivious main characters.

Shinichirou’s mother also plays an important role here. She’s like a catalyst to the plot in some way. She always hates Hiromi’s mother and treats Hiromi in a quite hostile way. She tells lies to Hiromi as a way to take her anger towards Hiromi’s mother out. Her lies seem pretty trivial to her but to Hiromi, it’s a really big deal. After knowing that her lies effect Hiromi more than she thought, she changes her attitude towards Her.

The animation of the opening gives a very calm atmosphere which is really welcoming for the audience. That is the reason why I immediately got hooked to this anime. However, the opening singer’s singing is out of tune at times. That really really frustrates me because how can a supposed professional singer sings out of tune? I can understand if it’s a live concert but this is recording! But well, that’s just a personal pet peeve of mine. Also It’s kinda amazing how the anime wants to enlighten the realisticness by adding more passers-by. Though, some of the time when they use the 3D animation, it doesn’t look that well. The background animation is detailed. There is almost never a time where there is a still frame. And I really like when the animation changes into the coloured sketch-like arts in the latter part of the series.

So, I think this anime is really great. It has simple yet engaging storyline, all the characters are likable, greatly developed and I like to think of them as somewhat deep characters. The animation is quite good but the 3D animation doesn’t look that well sometimes. The background soundtrack is good too I might add. To those who love either romance or drama, you guys really should watch this. Lastly, I’m so going to rewatch this soon because like I said, this is one of my favourite anime of all time.