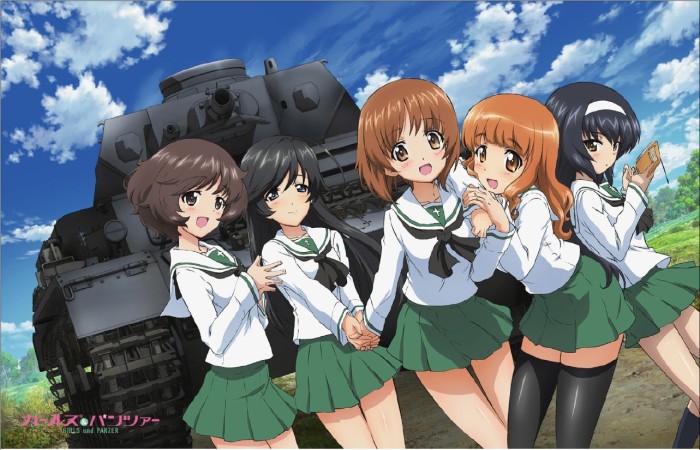 Nishizumi Miho enrolls a new highschool, Orai Girl’s Highschool hoping that she won’t have to do any tankery anymore due to a tragic past. However, The student council president of Orai Girl’s Highschool demand her to join the ‘Tankwando’ club, a club which does tankery. Since she is an experienced tanker, the student council members don’t want to let go of that advantage. Will Miho choose to join the club or turn down the offer? Well, the answer is pretty obvious…

Why did I end up watching this show? Well, obviously the tank battles attracted a big part of me. I mean seriously, who wouldn’t be attracted by the fancy tank battles? Since I’m not really against moe or anything similar to that, it is really easy for me to approach this show. And since I’m not against action anime as well, it makes it even easier for me to notice this show. Honestly, I enjoyed the hell out of this show.

So the story revolves around Nishizumi Miho who enrolls a new all-girl boarding school avoiding any tankery activities. Since the school has no tankery related club, she thinks it is a good choice of school to run away from tankery altogether. Little does she know that the school’s ‘Tankwando club’, a club which does competitive tankery is being revived the year she enrolls. Furthermore, the student council president insists her to join the club as her experience in tankery should not go to waste. Miho understandably does not want to join the club at first but after being comforted and convinced by her new made friends, she finally agrees to join, hesitantly enough though. So from then on, the revived tank club members, commanded by Miho fight their way to the top of the tankery competition. Also I forgot to mention, in their world, tankery is a highschool sport for girls and whoever does tankery is considered has high honour.

One thing that I find interesting is the setting. The school, surprisingly is actually on a really large ship. The ship is enormous, it even has cities and well, a school. Also, the tank battle trainings are done on the ship so just imagine how big the ship is. The actual tank battle sport (and I emphasize ‘sport’ because it really is) is done on land where the area is much bigger and it varies geographical shapes and weather.

The highlight of this show is clearly the tank battles which is actually a sport competition. A sport competition where if the bullets are fired and hit a tank, the amount of explosion is nearly nonexistence and nobody in the targeted tank is hurt but if the bullet does not hit any tank and hit ground or other things instead, the explosion is gigantic. It seems that the tanks have some kind of anti-explosion gadget attached to them.

I always in it for only for the tank battles actually. It’d get me fired up whenever the tanks are moving. The whole tank battles are very exciting and thrilling but it can also be intense at times. The world war two tanks move in a realistic manner which after I watched it, I thought ‘whoa the tanks move very fast! I didn’t know tanks can move that fast’. Since our main character’s team is always the underdog being inferior in numbers, weaponry as well as overall experience, it’s not hard at all to cheer for them. The tricks that Miho pulls off during battles that leads her team to victory is not just by pure luck. There are some believable and somewhat realistic strategies that Miho improvise but even if it’s not entirely realistic, it is easier to just accept how they win. 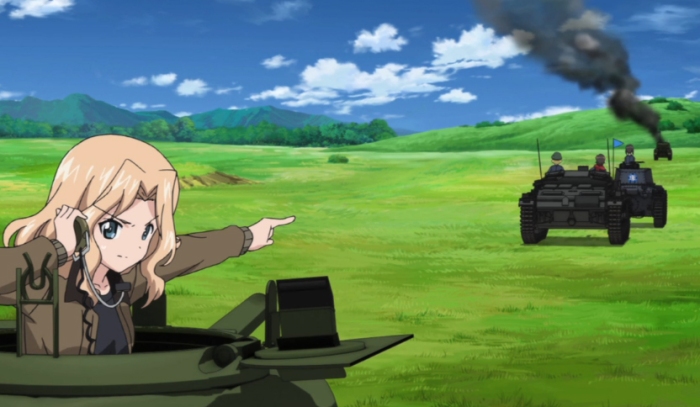 The characters in this series are many since a single tank requires a minimum of three people to operate it. Aside from the main character Miho and some of her friends, the other characters doesn’t get much exposure. Not that they need it but it might be interesting if we get to know them better. Since most of the characters are not that important, each ‘group’ of characters are put into one tank. So you will identify them by, ‘oh, that tank is operated by the volleyball team. Oh, and that tank is operated by some online tank game freaks’…get it? Good. I can’t deny that they tried to put some depth to some of the characters especially Miho which doesn’t work all that well but it doesn’t matter to me that much because I’M ONLY IN IT FOR THE TANKS!!!

As far as I can tell, the animation is very good, it makes the whole tank battles experience much better… that’s it. The music, I really like the military-like soundtrack whenever the matches begin. And I especially like the song sung by the Russians, Katyusha. For some reason, it got stuck in my head and I find myself listening to the song every single day. Creepy man.

Because of the exciting tank battles, I really this anime. It’s quite unexpected really since I thought it would focus more on the moe-slice of life genre. The main story and the setting is quite unique in my opinion but the characters and their background story might not be as good as you want to. However, even if other elements in this show is mediocre at best, the tank battles will definitely cover those other flaws.