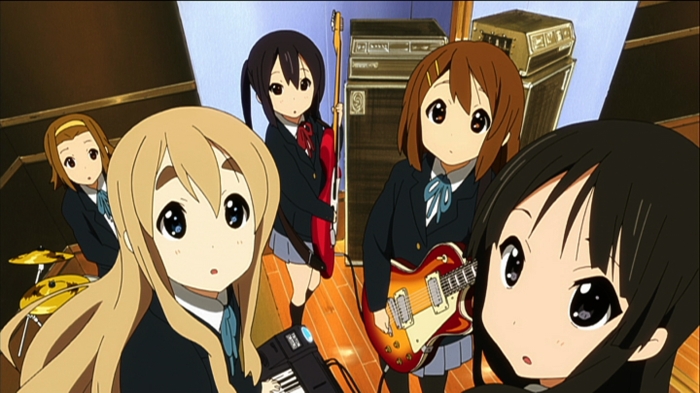 The Light Music Club senior members are on their final year of school. They have one last year to enjoy their moments with each other. So they had fun to the fullest… by drinking tea after school.

Here’s what I thought when I was watching the first episode.

I seriously need to stop hoping for a great performance because if I do, I will only disappoint myself…

After numerous times being disappointed, I was finally be able to stop hoping for it. I deliberately told myself ‘this is not a band or a musical anime. This is just a comedy anime which uses music as a… plot device??’ I was able to forget about the performances and acknowledge the comedic side of the show which I didn’t find very funny. I mean, there are times where the jokes are genuinely funny and made me laugh out loud (kinda) but most of the time, the jokes barely made me chuckle. But if I can’t enjoy the band performances and the comedy, what should I enjoy? The characters?

Okay First off, the characters are way too cute and extremely likable. I still like the chemistry between Yui and Ritsu. Yui is the one who mostly made me laugh mainly because of her airheaded personality. I also like the childhood friend relationship between Mio and Ritsu. Even though Ritsu is a severely airheaded girl (pretty much like Yui), she can be reliable toward the shy Mio at times especially during the summer festival where Mio is acting out of control for the love of music (Wait music? No no, don’t hope for it again, trusts me). Mio, she’s my personal favorite. She is the most mature among the five, she writes and sing songs for the band, she plays her bass guitar left-handed (even in real life, I always find left-handed people more attractive), she can sing while playing the bass, she can… and that, people, is why she is my favorite character in the show. Mugi is so adorable! That’s it. Azusa, to me she’s trying to balance up the chaotic personalities of the other four. She is a bit awkward towards all the members of the Light Music Club. Well, she is a junior after all. The highlight of her character is at the latter part of the series. 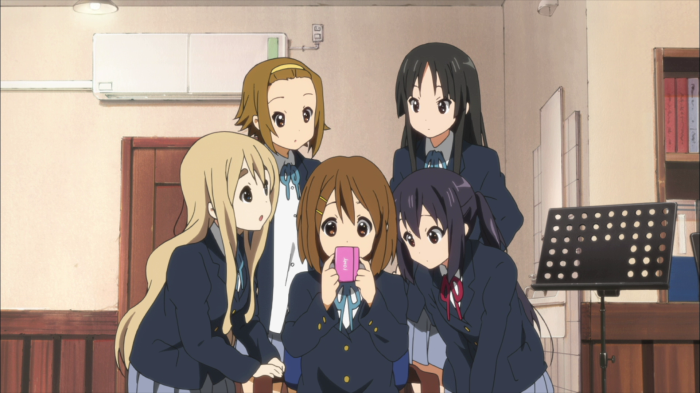 Since this is a comedy anime, there isn’t any particular plot or story in it and the connection between each episode is very subtle. The story in an episode too isn’t that interesting. To give you some examples, there is an episode where Mugi struggles to literally get smacked by others. There is also an episode where the girls struggle to practice elsewhere because at that time, their clubroom can’t be used for some valid reasons. It’s funny though, the only time they want to practice hard is when they are prohibited from using their clubroom. What are they doing in the clubroom all this while? Drinking tea of course!

So basically, I couldn’t possibly enjoy the story right? It is true that the story is mostly just plain but it all changes after episode 20, my favorite episode in this show. After this period, the anime feels different as you know that they know that they are going to graduate really soon. Sure, they are just having fun like always but at the same time, deep inside they feel sad to know that they are going to be separated soon. This is the highlight for Azusa. She knows she will be alone once her seniors graduate so she treasures the last moments together and appreciate it.

Friendship is the standout of this show especially at the latter part. They don’t have any problems with each other and they don’t fight with each other. That’s because the anime only shows the positive side of friendship so of course it’s not realistic. But the little positive things such as having and trusting each other are what most of us take for granted. We tend to only realize when we don’t have them anymore. Their separation and all their joyful experiences with each other made what it seem meaningless meaningful. I seriously never thought these girls would leave me a deeper meaning.

In my season 1 review, I did say that I watched this anime because of the music. I love their songs very much. The song sung by Yui or its seiyuu, Aki Toyasaki are very complex (I might say), fast paced and full of the element that people often call it ‘stress’. Since I listened to K-ON songs, I am now very attracted towards any song that has stress in it. However, her awfully horrible and irritating voice brings down the whole quality of the song. I mean seriously, if I found the Go Go Maniac song randomly, I would stop listening right after 10 seconds into the song solely because of her voice. Thankfully, I didn’t find it randomly. It was my little sister who (had shown the song to my father and he liked it which increased my curiosity as to why he liked it considering he is pretty critical towards music as a whole) showed it to me. After enduring the horrible voice until the end of the song, I have to say that the song is great. Naturally, I searched for other K-ON songs sung by her. But it’s not for everyone though.

The song sung by Mio or the Seiyuu, Yoko Hikasa are simpler but still have a sheer amount of stress. Her songs are closer to my taste and her voice is much better. My favorite song (maybe) would be ‘Listen!!!’. By the way, how the heck does she sing while playing the bass? I mean, do you know how hard the bass of all their song is? I can’t even play the simplified version of the bass perfectly (probably because I’m a noob) let alone singing while playing. Gosh, she must be a prodigy to be able to do both simultaneously perfectly at her age. Also, judging from the series, she barely practice!! And she is very good in academic too!!! 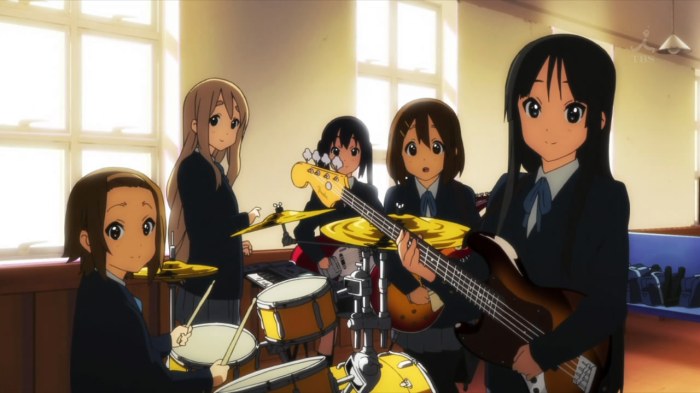 Woah, it seems like I’m straying off the topic here. So overall, this is in fact a pretty fun show. It at least has some meaning to it and also has a clearer ending. Other comedic anime series doesn’t have an ending. It just stopped. So to know that this series has a proper ending is a major plus for me. In order to have fun with this series, you don’t really need to criticize it. Sure there are boring moments because nothing much happens but if you can just enjoy watching these girls, you’ll have fun as much as I did. Lower 4 out of 5 stars.

Since I reviewed season 1 and season 2, I might as well review the movie.